The ‘CAP’ in the CAP theorem, explained

Consistency means that all clients see the same data at the same time, no matter which node they connect to. For this to happen, whenever data is written to one node, it must be instantly forwarded or replicated to all the other nodes in the system before the write is deemed ‘successful.’

Availability means that any client making a request for data gets a response, even if one or more nodes are down. Another way to state this—all working nodes in the distributed system return a valid response for any request, without exception.

A partition is a communications break within a distributed system—a lost or temporarily delayed connection between two nodes. Partition tolerance means that the cluster must continue to work despite any number of communication breakdowns between nodes in the system.

when linux loads, it starts 2 processes: swapper and then init. each process has pid – integer 32bit. means there can be 32k processes in total. a process can create a child process using fork() or create another totally different process using execv()

wait(*status) is called by the father in order to wait for its child process to finish.

each process has a state, this state can be

A process is created with single thread called the primary thread

Daemon process: A process run in the background without user interaction. The parent process of a daemon is often, but not always, the init process. A daemon is usually created either by a process forking a child process and then immediately exiting, thus causing init to adopt the child process, or by the init process directly launching the daemon

clone(): When a process is created, it is created with one thread called the primary thread. it can be duplicated using the call clone().

The kernel creates threads using the call sys_clone() and not clone().

In a process, each thread has its own stacks (user and kernel) and registers.

when a thread creates a process using fork(), the process has one parent which is that thread. the other threads cannot wait() on this process.

when running execv() inside a thread, it creates a new process with a new thread – the primary thread of the new process. the rest of the threads are killed.

each process has a table named PDT - Process descriptor table.this table contains the descriptors of the files that are used by the devices.

The communication methods are:

The interrupt is a signal handled in the kernel by the CPU. The CPU Checks for interrupts between each two commands it executes. if there is an interrupt waiting, the kernel switches the user stack to the kernel mode stack of the current process in order to handle the interrupt (in linux, interrupts are handled by the kernel).

There are two types of interrupts

What is the difference between mutex and semaphore

Both Semaphore and Binary Semaphore does not have ownership of the thread that locked it while mutex does.

This is how lock on mutex(spinlock) is implemented:

What’s happened in the Linux System after using ‘ls’ command

strace cmd tells us all activities behind the command.

In order to create a heap, we need to do a post-order on the tree nodes and sift them down when necessary.

Coupling refers to the knowledge or information or dependency of another class. It arises when classes are aware of each other. If a class has the details information of another class, there is strong coupling. In Java, we use private, protected, and public modifiers to display the visibility level of a class, method, and field. You can use interfaces for the weaker coupling because there is no concrete implementation.

Association can be undirectional or bidirectional.

The composition is also a way to achieve Association. The composition represents the relationship where one object contains other objects as a part of its state. There is a strong relationship between the containing object and the dependent object. It is the state where containing objects do not have an independent existence. If you delete the parent object, all the child objects will be deleted automatically.

Two approaches for this problem, the first is strategic – e.g, using dynamic-programming while the last is a trick.

Let’s say I am standing on element i in the array arr. if i know for each j<i the LIS, then the LIS for arr[i] would be arr[j]+1 under the constraint arr[j]<arr[i] for each j<i. if we have several j’s which hold the constraint, then we select the one which maximizes the sum. This is a dynamic programming solution. by adopting a bottom’s up approach, we can initialize an array named dp with size |arr| where dp[i] represents the LIS of the element arr[i]. in the beginning, each cell of dp will be initialized with 1 as each number is LIS of itself. starting with i=1, we scan all the previous cells of dp to find the j that maximizes dp[i]: for each j<i and arr[j]<arr[i], let dp[i]=Max(dp[i],1+dp[j])

The time complexity her is O(n^2).

LIS can be solved with O(nlogn) by using binary search on a new constructed array named dp which will reflect the length of the LIS (and not the LIS). we try to build an LIS by trying to add each elements in arr to dp in the appropriate position. lets say if arr[i] cam be entered at index j at array dp then it means that arr[i]<dp[j] and we will replace dp[j] since adding a smaller element will keep the increasing LIS and will enable adding more elements bigger than dp[j] by lowering the peak. i.e, the sequence 1,2,4 will have a better potential to accept elements from arr compared to the sequence 1,2,8.

with O(logn) and O(1) space: merge-sort bottom-up as referenced here

Note:
You may assume k is always valid, 1 ≤ k ≤ n2.
Solution: Use a min heap: place the first row and take k-1 times the min element. when an element is out, put in the min heap the next element in the same column

Given sorted matrix NxN, you can find a number with time complexity O(logN): divide the matrix to 4 sections, choose the section where the number we are looking for is in the range…and do the same division to this section and so on..

Given infinite numbers of coins, given the denominations, how many ways there is for change?

Find the Duplicate Number: here, the trick is two pointers, one fast and one slow. if they meet, then they meet in the loop. we keep the slow pointer rotating in the loop while we start a new pointer from the beginning. they will meet again in the beginning of the loop

Unique paths: here, Dynamic programming. what is the number of the paths that a robot who can go right or down tries to start from the up left corner to the bottom right. the solution is to use a matrix and do the bottom’s up approach: : suppose the number of paths to arrive at a point (i, j) is denoted as P[i][j], it is easily concluded that P[i][j] = P[i - 1][j] + P[i][j - 1].

Coin Change: You are given coins of different denominations and a total amount of money amount. Write a function to compute the fewest number of coins that you need to make up that amount. If that amount of money cannot be made up by any combination of the coins, return -1. 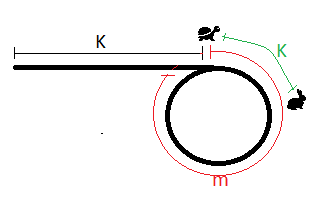 Givan a Tx Queue with length 16bytes. when the queue sends the 5th byte(moving from capacity 5 to 4) an interrupt is sent. your API providessend_tx(buffer,size). implement a drive api with an interrupt handler. The stack API that the drive can use is push_tx(byte). you cannot overflow the queue as the result will not be expected.
Notice: You are allowed to keep buffers until certain capacity is reached.
Solution:

One thought on “Toolskit for the SWE Interview”